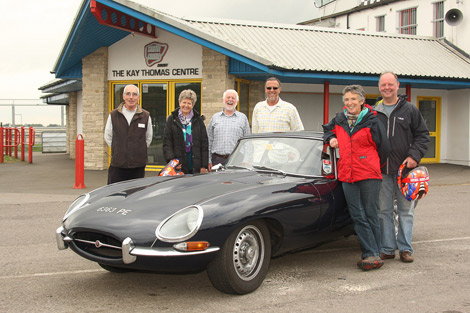 The event was not a race, but an opportunity for drivers to enjoy the capabilities of their own cars on a well-known motor circuit, under disciplined and supervised conditions, with ten minutes sessions every half hour throughout the day.

Cars on track ranged from 1960s classics such as MG Midgets and an Austin Healey 3000 to modern saloons and an Aston Martin V12 Vantage.

Passenger rides were also available and two therapists who support PTSD Resolution as well as some of the clients were able to experience the thrills. They were also able to drive their own cars at moderate speed on parade laps at the start of the afternoon.

Carol Harper, a PTSD Resolution therapist, said “I did not know what to expect but the PTSD clients at Bude had told me about the day and I had a wonderful time. What a great way to raise £3,000 for PTSD Resolution, such a worthy cause - a real Win/Win!”

The day was made possible by the generous support of Castle Combe management and also raised funds for the local North Wiltshire branch of SSAFA.

Colonel Tony Gauvain (retired), chairman of PTSD Resolution said: “I would like to thank Christopher Darwin and all his team for organising this excellent event – it shows how you can have fun and help a good cause!”

It is intended to repeat the event in 2016, provisionally in March.

For more information contact Christopher Darwin on 01288 381265 or c.darwin@virgin.net