PTSD Resolution -About Us 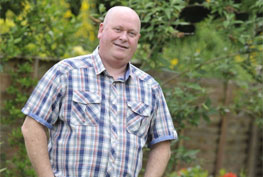 The former pupil of Sir John Leman School in Beccles served with the Queen's Own Hussars (a heavy tank regiment) in Germany and Northern Ireland.

"When you're a squaddie, whatever happens, you have a few beers and you push it all to the back of your mind. It's the squaddie way," Glenn Owen says. "But later it comes back.

One of our patrol was shot in Northern Ireland and it sort of hits you that you are a target.
I remember coming home on leave and having a night out with my brother, Micky.
We were just walking down the street and Micky was talking to me and a car must have backfired. Micky turned around and found me. I'd jumped into a skip.

" Some organisations won't help you if you are drinking but PTSD Resolution and Jayne, my counsellor, were brilliant.