New Book on the SAS by Resolution supporter 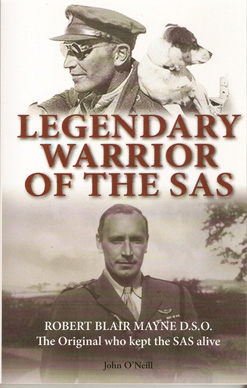 It is 75 years since the founding of the SAS by David Stirling. A book by John O'Neill called 'Legendary Warrior of the SAS,' previously available as an e-book, is now available as a paper back in book shops and is on sale from Amazon. Sales of the book go to support the very successful charity PTSD Resolution. PTSD Resolution provides free counselling to ex-servicemen and women to relieve the effects of military trauma.

The author John O'Neill has written an original and detailed account of Blair Mayne's life, character and behaviour especially after the war.

In O'Neill's own words:

"Blair Mayne was one of my great uncles. He was the second youngest child of my grandmother Molly Mayne. In a nutshell, Blair Mayne's approach to life was this: Who cares who wins; it's the taking part that counts.

"Whether he was playing Rugby for his Nation, or jumping out of aircraft and leaping onto beaches with the SAS, he simply enjoyed the physicality of everything he did in life. It is such a shame that he finally grew old and passed on, because he enjoyed life to the full especially in the company of his mates. He was also a fantastic family man carrying my mother on his shoulders wherever they went when she was young.

"In one of the letters that he wrote to my mum during the Rugby tour of South Africa he noticed how a snake charmer was performing his tricks. Even then he was interested in the kind of methods like sleight of hand, misdirection and confusion, which the SAS would develop into a fine art to cause massive damage to the enemy. Tactics which, of course, the SAS and other special forces still use today.

"Through my own experiences with bi-polar disorder I have tried to understand why BM did some of the extraordinary things he did. Like playing tricks on his friends and behaving sometimes in a child-like way. Freud said that, 'a mother's favourite will go through life like a conqueror.' But what happens to that child when he becomes an adult and his mother is dying. I believe, because I experienced the same thing with my mum, that the beginning of the end came for BM when his mother was diagnosed with Parkinson's Disease. I was fortunate to have had the support of my family in my fight against depression. And that support was multiplied tenfold when Colonel Tony Gauvain, Chairman of PTSD Resolution, put me onto one of his outstanding therapists near to where I live. This was a turning point in my life and I would like to think that through the charity I have now managed to put to sleep many of the demons that used to haunt me especially in my nightmares even as a child."

"O'Neill uses an original range of primary sources, visual material and analytical methods. He has produced an empathic and informed account that sets the demands of special forces and war itself in its proper human context."

"I very much enjoyed this book – I particularly appreciated the inclusion of some of BM's letters to his niece and the readings, speeches and obituaries written after his death. Both gave me a bit more insight into how he was understood by those around him and why he inspired such loyalty from his men.'

To buy the book visit https://www.amazon.co.uk/
Also available as an E-Book in PDF format from the PTSD Resolution website Here