22PressUps: Get Fit, Have Fun, Help our Veterans 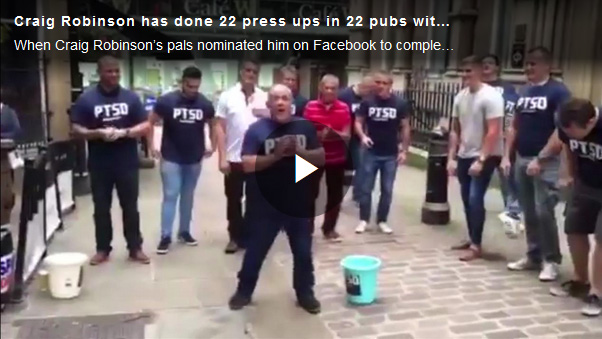 WHEN 43-year-old Craig Robinson’s pals nominated him on Facebook to complete the 22 Press Ups challenge for charity PTSD Resolution, he decided to call in back up.

He rounded up some rugby friends and organised a pub crawl with a difference, carrying out the challenge in 22 pubs from Bingley’s Wetherspoons to the City Vaults and The City Gent.

PTSD Resolution is a charity helping veterans, territorial army and reservists who are struggling to settle back into a normal work and family life because of military trauma suffered during service in the armed forces.

The challenge was started by an American campaign group called #22KILL, which is hoping to reach 22million press ups in total. Its aim is to raise awareness of veteran suicides and word spreads via social media, where people post videos of themselves in action and challenge others to take part.

Mr Robinson’s sister-in-law, Claire Adams, said: “Craig got nominated and didn’t want to do it alone so he got some mates involved and decided to make a day of it.

"The response we got was amazing. We had to run and buy more buckets.
"People were so generous, it just went crazy.
"We even had a bride and groom join in the press ups in one of the pubs!"

The challengers have so far made more than £900 and donations can still be made online at justgiving.com/fundraising/22p22p.