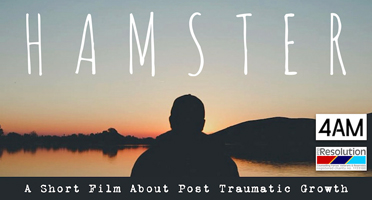 4AM Pictures - a young, Nottinghamshire-based production company - is preparing to film their latest project ‘Hamster’ in partnership with charity PTSD Resolution. It’s a story about trauma from writer/director Scott Driver and UK Veteran Johno Lee.

“The film is about hope,”says Scott. “Our overriding goal is to emphasise the benefits of therapy and encourage soldiers, sailors and airforce staff to get help to resolve their mental health struggles.

“The film will be dedicated to the Veteransthat live amongst us, as well as their families and friends. Itwill express support and shine a light on some of the issues a Veteran might face- and the experiences of those close to them. “

Principal photography for ‘Hamster’ will take place in Newark, Nottinghamshire, where the crew is based. Over a week long shoot they hope to capture the story of Lewis, who returns home from service in Afghanistan after experiencing trauma and the loss of a friend. Lewis finds himself consumed by his PTSD - and sadly suicide gradually becomes an appealing option. Just before he reaches the point of no return, Lewis attends a therapy session where he opens up about his feelings for the first time - and with this we see him begin on the long journey to recovery.

When director Scott decided his next short film would be about a soldier, a mutual friend connected him with Johno, a local Veteran, Scott was moved:

“I sat and listened to Johno tell me his story on a two hour phone call and came away more inspired and motivated than I’ve ever been. It wasn’t until three months later that Johno expressed his desire to be involved with the project. He’s now producing the film and advising on the script and I can ’t thank him enough for his input.”

From this point, the team reached out to PTSD Resolution who have now joined forces with 4AM Pictures to bring this inspiring project to life. The team will be sharing the filmmaking process on social media and via their crowd-funding page - hoping to encourage local and young creatives to join them and be a part of the film.

Every donation will help the filmmakers meet production costs. If you cannot donate, please watch and share the team’s powerful introduction video:

PTSD Resolution, Charity No. 1133188, provides therapy for the mental health and welfare of Forces ’ Veterans, Reservists and their families. The treatment is free, effective and delivered promptly through a network of 200 therapists nationwide, and now by phone and internet during the pandemic. Contact www.PTSDresolution.org .

Therapy is delivered in an average of six sessions, with 78% of cases seeing an improvement in reported symptoms to where the client and therapist agree that no further therapy is required.

The charity is one of the only organisations that provides therapy to veterans who are also suffering with addiction issues or are in prison. Services are also delivered to family members, including partners and children, who may experience the symptoms of trauma from living with a traumatised veteran.