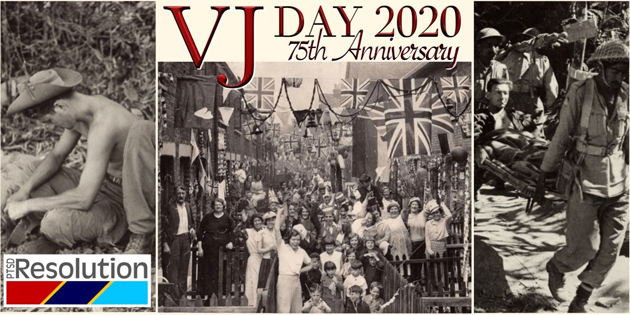 To commemorate the 75th anniversary of the victory over Japan, VJ Day, armed forces’ charity PTSD Resolution has launched an online ‘memorial wall’ for relatives to remember veterans of the UK services in all wars who died without a known grave.

Colonel Tony Gauvain (Retired), chairman of PTSD Resolution, whose father was killed in action in Singapore in 1942, says:

“VJ Day on August 15th marks the day when Imperial Japan surrendered in World War II, bringing the war to an end. The memorial wall initiative serves as a reminder of all those people who were killed in action and reported as missing presumed dead, and who do not have any gravestone by which to honour their memory.

“PTSD Resolution is proud to launch this online Memorial Wall for those wishing to remember, and by doing so, to support the recovery of the mental health of veterans and reservists who have survived and also family members who may be affected.”

“The Commonwealth War Graves Commission provides the #ShareYourTribute service, where relatives can submit photos and tributes, but for many relatives, there is no grave to visit. This puts an additional mental strain on the bereaved.”

Tony Gauvain’s father Major Rowland de Putron Gauvain was posted as Brigade Major, 8 Indian Infantry Brigade, Kota Bahru. In 1942, injured in confused fighting in the Turong Road area, Singapore, he was reported as killed in action by the Japanese, at the fall of Singapore. His final resting place is unknown.

The estimated deaths of those under Japanese control in Singapore range from a Japanese estimate of 5,000 to that of the Chinese of 50,000.

Relatives of fallen veterans with no grave can submit details and an image by using a form on the PTSD Resolution website. There is no charge: visitors are invited to make a charitable contribution to the work of PTSD Resolution in providing free mental health therapy to traumatised veterans, reservists and their families. Relatives can also check the website of the Commonwealth War Graves Commission.

The Armed Forces Covenant Fund has awarded PTSD Resolution a grant of £35,000 under the Covid-19 Impact Programme. This will help the charity to maintain support for the mental welfare of veterans while they face additional stress from the economic and social impact of the pandemic, at a time when donations to all charities have declined.

The symptoms of military trauma can result in family breakdown, job loss, addiction and suicide, says Tony Gauvain. Veterans or family members who believe that they may be suffering from the symptoms of trauma can get help from PTSD Resolution anywhere in the UK. Therapy is delivered either online or in person through a network of 200 local therapists.

The charity has no salaried staff and owns no assets; donations are used to pay therapists to provide treatment, raise essential funding, and ensure that veterans and potential referrers are aware of the vital support that is available. A course of treatment averages five out-patient sessions and costs the charity around £600, which is delivered free to clients.