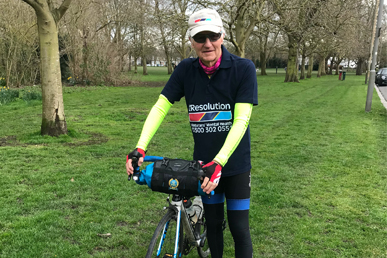 We caught up with one of our newest fundraisers over the phone this week and heard about his own military background, his reasons for supporting us and why he wants more people to come forward and get the help they need.

"Having heard about the life changing work PTSD Resolution is doing, I've decided to raise enough money to pay for the treatment for 20 veterans by pedalling 500 miles on what's known as the North Coast 500."

Jonathan Thomson's first brush with the military as a school cadet wasn't good; "I loathed it … too much marching around and all that superficial stuff…", so the career he then pursued - taking him into the Marines - is a bit of a surprise.

It was Jonathan's school House Master who suggested he joined the Marines. Turning up at the Infantry Training Centre Royal Marines (as CTCRM was then called) Jonathan jokingly describes himself as being; "Skinny and fit but unable to carry anything..", that soon changed after a year and half of intense training.

A stint of active service with 40 Commando in Borneo was followed by directing the physical training for 2,000 men at Eastney barracks in Portsmouth, where he also took up orienteering, representing our country in two World Championships. And then it was back to Malaysia to lead jungle combat tracker training, working with a 40-strong dog team.

The dogs supporting the operation were Alsatian's (infantry patrol) and Labrador's (used for tracking). To keep things interesting in training Jonathan would sometimes go out and track other exercises. More than a few times during debriefing, he was able to tell the guys exactly where they'd been, and tell them what they'd left behind.

Posted to 45 Commando, he served in a number of campaigns including Northern Ireland and Northern Iraq; then spent time at Dartmouth, trained young officers at Lympstone, led a small group during the Falklands War, and finished by developing the UK's rapid deployment system, still in use today.

Leaving the services, he spent some time as COO of two companies before deciding at 70 years old, to help '65 Degrees North', an organisation that works with injured or wounded veterans, taking them on cycling and sailing expeditions.

Jonathan has witnessed first-hand the impact that untreated PTSD can have on veterans and their families and also how PTSD has been ignored in the past. He said, " I shudder to think what it must've been like in 1946 – there must've been some very damaged people walking around – their symptoms ignored and not understood".

"It's really only in the past 30 years that we've begun to understand how distressing and debilitating PTSD can be."

One of Jonathans treasured books is, The Anatomy of Courage: the classic WW1 account of the psychological effects of war. Written by Lord Moran, (a WW1 medical officer - latterly Churchill's doctor during WW2), and published in 1945 it drew much needed attention to the impact of war on soldiers – 30 years before the term PTSD was created. And as Jonathan says, "Even now as a country we aren't doing enough to support our veterans.

"Having heard about the life changing work PTSD Resolution is doing, I've decided to raise enough money to pay for the treatment for 20 veterans by pedalling 500 miles on what's known as the North Coast 500.

"There's hope and help, so give the charity a call. Every journey starts with one step."

Hoping, like we all do, that things improve later in the year, Jonathan's planning to start cycling at Inverness on Monday 5th October 2020 and cycle for seven days on the 516 miles loop around the north of Scotland before returning to his start point.

And just in case the government starts restricting people from cycling in London where he lives, he's installed a turbo trainer in the garden, so he can carry on training.

He ends by saying; "I know how to do this. I've decided to do this and I will do this". As if there was any doubt …

Please help. Even the smallest donation will help Jonathan to meet his target, and will be another step closer to treating the next Veteran or Reservist desperately in need of help.